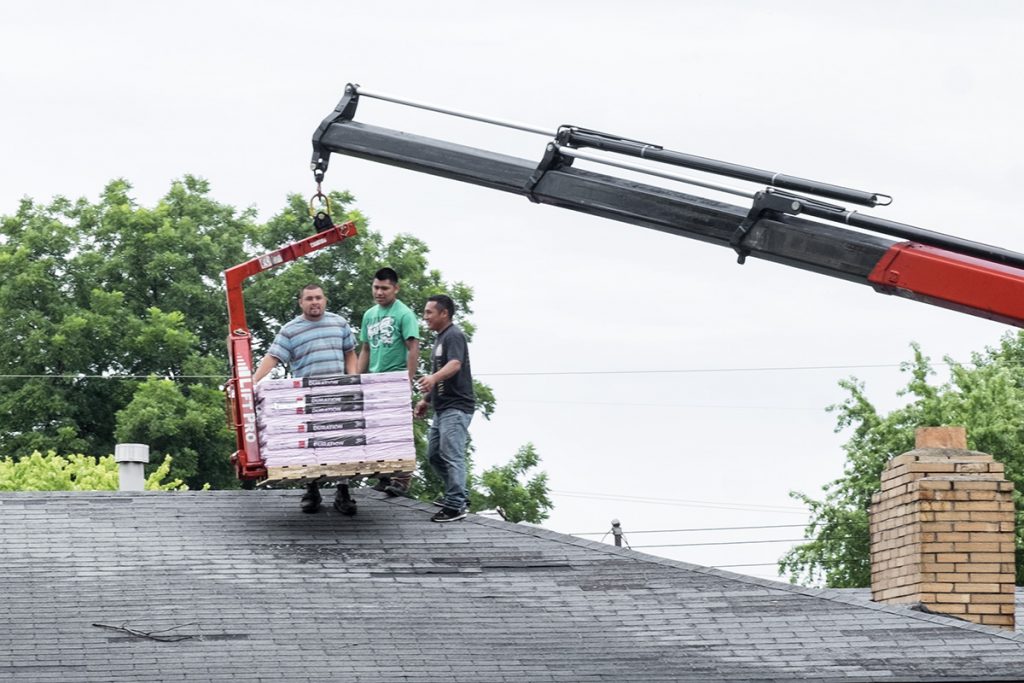 Judging by what I see, hear and read, Hispanic-Americans are taking over much of the trades in the United States. I think every single roofer I’ve noticed in the past several years has been Hispanic. The workers in this photo, btw, are American citizens, but of course others are undoubtedly working here illegally.

The reason for this – again just going by what I see, hear and read – is that they are very, very hard workers. The days of Slowpoke Rodriguez are long gone. Even if they are paid the same wages as other Americans, local Hispanics are cheaper to hire because they typically get the job done in half the time.

When I was in New York and needed movers, I hired a couple Mexican Americans from one of the street corners where independent contractors congregate. They literally jogged up and down the stairs with heavy boxes and other stuff all day. That got me interested, so I did some research on the street corner contractor scene in New York and learned that everyone had the greatest respect for the Hispanics. Eastern Europeans and other Americans had trouble getting work until all of the Hispanics were taken.

Where I live, there are still a lot of good blue collar jobs, and a lot more that aren’t so good, but provide a paycheck and a job history to build on. Employers have a lot of trouble filling those jobs.

The reason? Too many Americans cannot, or will not, pass the drug test. And there aren’t enough immigrants to fill them.

I know saying that about regular Americans is inviting flack among liberals and leftists, but it is true, certainly within my experience. My experience consists both of interviewing employers as a journalist, reading the same thing in articles by other local journalists, and actually knowing quite a few people who would rather smoke pot than work a shit job, and aren’t the least bit ashamed about it. Hell, I’d rather smoke pot and be poor than do a lot of these shit jobs, and still be poor.

Not that they would work as hard as the recent immigrants even if they did want the job bad enough to quit smoking pot for a month, but that’s a bit of a different question. I’m guessing the second generation immigrants, certainly the third, will settle into more typical American ways.

Still, for the time being, it’s a sad state of affairs.

And it illuminates good reasons for legalizing marijuana, or at least taking it off the list of substances employers test for. It’s not just the fact that not having smoked pot for 30 days is a condition for employment, which does absolutely nothing to improve safety or anything else. A lot of these shit jobs are painful, seriously painful, and marijuana is probably the best way for people to cope. It is certainly better than alcohol, opioid pain pills and Xanax, which is how far too many people cope today.

And here in the horribly backward state in which I live (the most dangerous thing about a Trump presidency may well be that he dies and Mike Pence takes over), people with opioid  prescriptions have to pass a drug test four times a year to get them. If they test positive for pot, they can’t get another prescription for six months. This has led to more than a few suicides, and countless overdoses (people don’t stop getting pain pills just because a doctor quits prescribing them). And for what? In a sensible universe, doctors would be encouraging people to use medical marijuana instead of opioid pain pills. It’s truly a no brainer. Unfortunately, too many politicians have no brain.

And they are willing to sacrifice their bodies to do them. That may be good for them in the short term, and for their employers, but it is bad for the country. Well paying jobs with solid workplace protections and a sane medical system would make so many of these problems go away.