Chuckling in the Bardo is a short fiction. You can take it literally or figuratively. It’s very loosely based on the Bardol Thodol, or Tibetan Book of the Dead, a Buddhist text that describes an intermediate state between life and death in which the narrator faces a number of tests, including strange landscapes, lost souls, peaceful and wrathful deities that determine whether he will achieve enlightenment or be reborn, possibly to a better station, possibly much worse.

The Music is by Sturgill Simpson, from his album Sound and Fury. Ronin and some of Remember to Breathe. If you are unfamiliar with it, you should definitely watch the video he had made with top Japanese anime artists for the album on Netflix. Just search for Sound and Fury, or Sturgill Simpson.

Should anyone come across this questionable use of copyrighted materials, I consider it fair use as this is a private post, not visible to the world, no more than five people will see it, and it won’t be up for long.

My wife is really into what they call “police procedurals,” and the like. Things like NCIS, Bones, Castle, and who knows what else as there are so many and it is difficult to tell the difference between them. Last night it was “Wisdom of the Crowd.” Anyway, I can’ help to notice that they are all fast paced and centered on violence, most often – if not always – murder.

I noticed this, or noticed it yet again, because I’ve been watching two much slower moving shows that are centered more on regular people.

I really enjoyed “Patterson,” reviewed here by Glenn Kenny, which is definitely slow moving. It may even be a great movie. Time will tell, of course, but it is easily my favorite by Jim Jarmusch so far.

“The film feels like one in which nothing is happening, but it’s not happening beautifully…” writes Kenny.

Nice line, and I don’t mean to do Glenn any disservice, but a lot is happening, and it is happening beautifully.

Just one thing: Living out here in this bizarre 90+ percent white America, the film made me nostalgic for the real America found more often in the cities and surrounding metropolitan areas. The film in no way does anything to draw attention to it, but the entire plot takes place in a diverse culture, with different looking people from radically different backgrounds interacting in a friendly and polite manner – or you could say, just like real life. Only one scene is at all violent, but by any modern standard it is not very violent, and it succeeds in deepening our understanding of the character, or at least opening up a mystery. And there’s a lot more to the film than those elements. Kenny suggests that multiple viewings are rewarded with deeper understandings. I look forward to seeing it again. 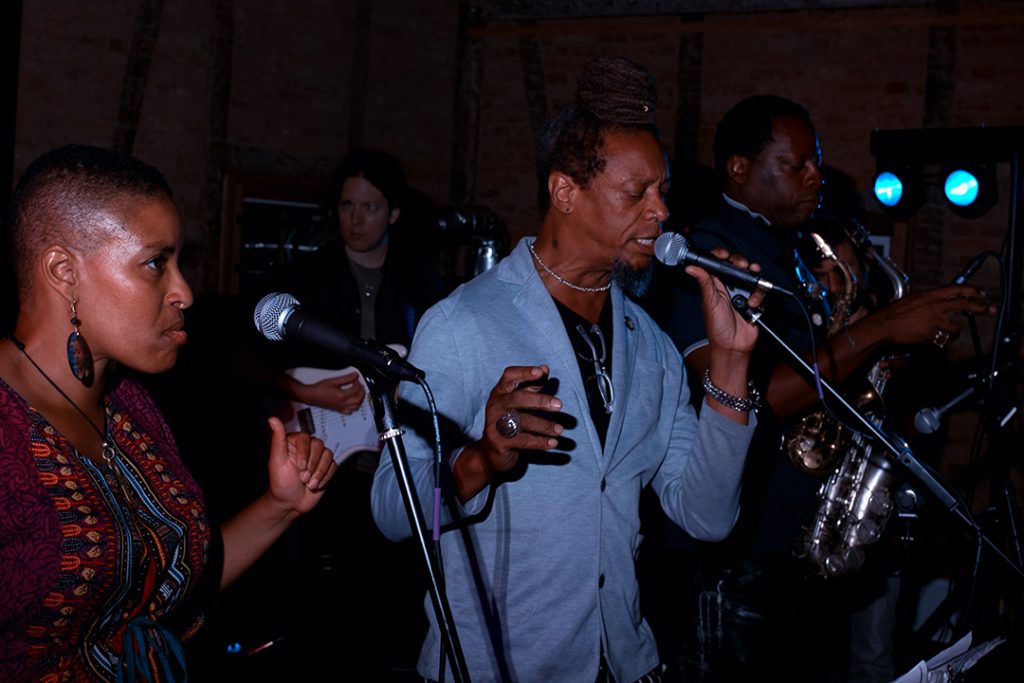 Burnt Sugar ‘s music moves in and out of many genres, but generally inhabits a Jazz – Soul – Funk space. And as their name implies, Sun Ra is a major influence, but far from the only one. I had one of their records on while driving the other day, drifted off and thought I was listening to Eddie Hazel era Funkadelic, which actually is one of their other primary influences. But their influences are all over the place. They opened the show with “Lonely Woman” the Ornette Coleman classic from his seminal album “The Shape of Jazz to Come,”  which featured incredible drums and sax  from Lafrae Sci and Mica Gaugh.

Check out those links, and check out their music.  And if you like their music, check out Rebellum, an offshoot band with many of the same members that played the New Harmony show. The Rebellum song, Rockstar Amnesiac, was one of the (many) highlights of the show. 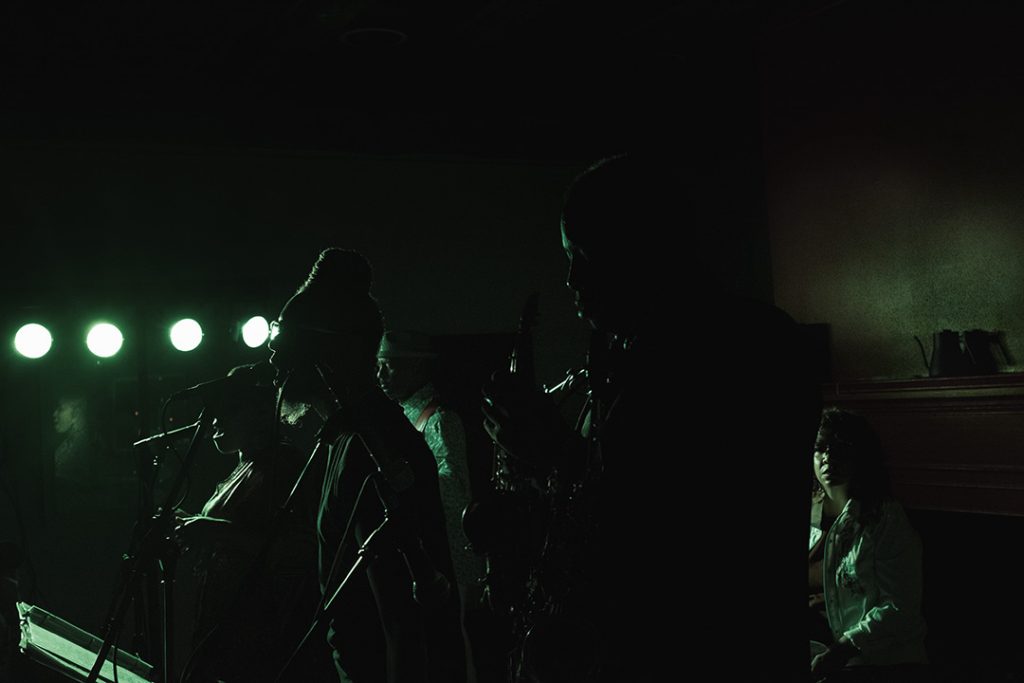 Burnt Sugar made the small town stopover between gigs in Nashville and Chicago.  New Harmony, however, is not just any small town. The site of two early 19th century Utopian communities in the early 19th century and the playground/museum for one of the wealthiest women in the world for the second half of the 20th, it has a long history as a friendly place for artists, musicians, skilled craftspeople, intellectuals, and generally interesting folk. 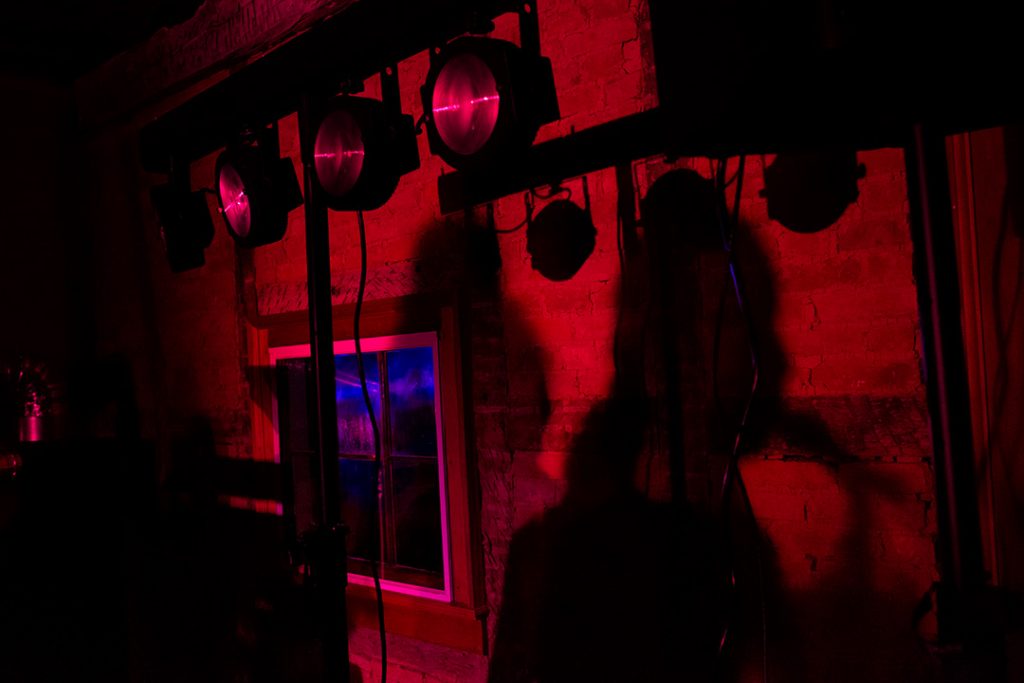 In recent years, a fascinating music scene has been developing in New Harmony. Chris Layer’s annual Music Festival and School brings in top flight musicians  from all over, including Mazz Swift, who is also a member of Burnt Sugar, although not part of this particular show. More recently, Marc Chevalier, a longtime Nashville recording engineer and his wife have opened a coffee roasting business and coffee shop and have begun bringing more worldly and alternative bands to town. Marc’s sound engineering took last night’s concert to the next level. World class band, world class sound, world class little town. Nice experience all around. 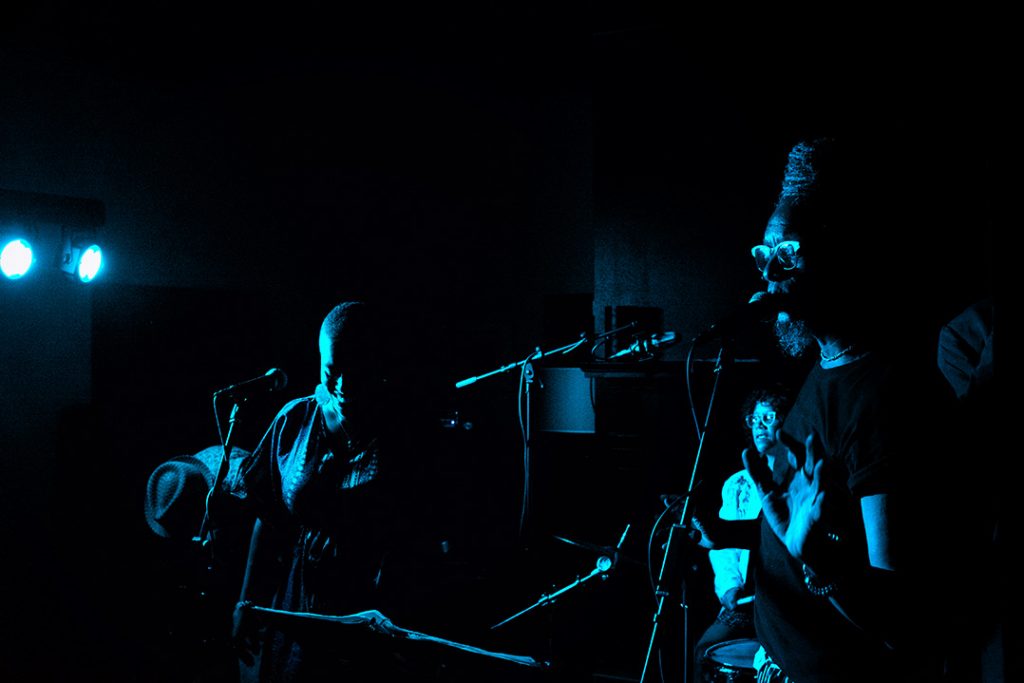 In one of the more extreme examples of what a small world we live in, and how great New York is, Lafrae Sci recognized my wife and I. Turns out she briefly worked at our son’s school in Brooklyn 10 or so years ago – and was one of his favorite teachers ever – and she somehow remembered us. Lafrae is one of the world’s premiere Jazz drummers. New York is like that. Anyone you meet in the workaday world could be supremely accomplished in some aspect of the art world.

The whole night – great music, talented people at the top of their game – made me really miss the big city. And the happenstance of running into Lafrae did too. You know, lately we’ve been living in a small town of 7000, and it was more common for us to run into people we knew in Brooklyn that it is to run into people we know here. Hell, it was just about as common running into Dennis Leary in New York as running into high school friends in my little hometown. People in New York get out a lot. Here, not so much. I recognized it a long time ago, but I still find it odd. Brooklyn today, and much of New York City, is more like the small town I grew up in than the current version of small town I grew up in. 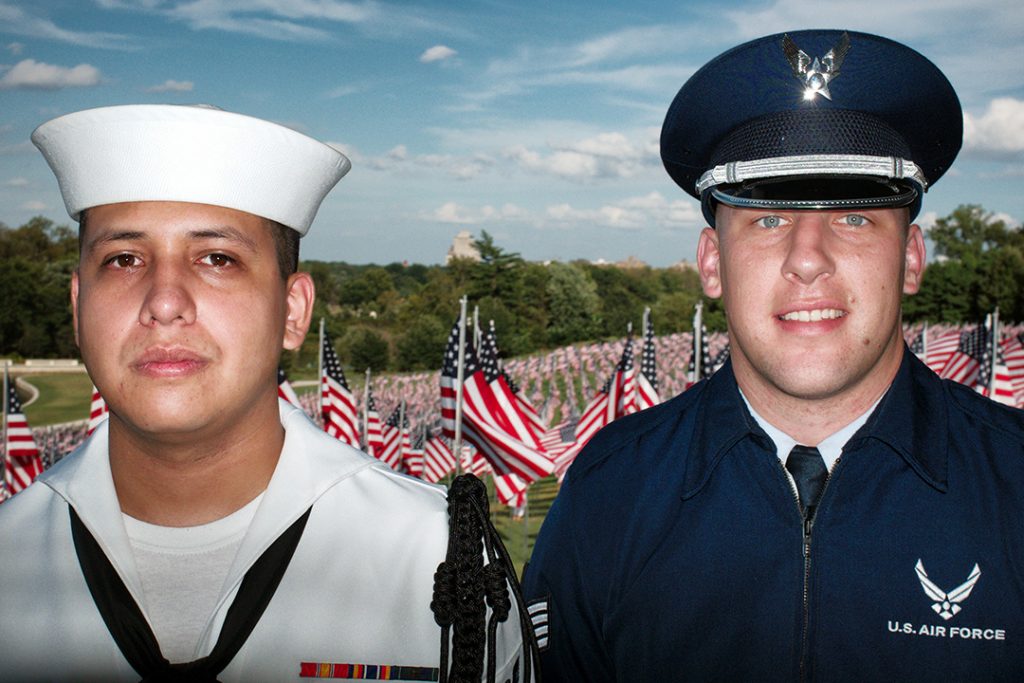 The other day I drove by this old fashioned carnival as they were setting up. The mechanical rides, games and concessions were much the same as when I was a kid, so I came back and did a hit-and-run photo project on Saturday night. This is a coal mining region in southern Illinois where, as more than a few people I spoke with informed me, most of the mines have closed in the past few years; several adding something along the lines of “thanks to our wonderful president.” Somehow I managed to keep from saying “Obama caused global warning? But of course he did.”

Anyway, although this is just a quick hit-and-run, and it shows, I think these old carnivals might make for a good project. Maybe next summer?